NOT A Flannel Friday, But Parachutes, Scarves & A Kite Craft

This week's theme was both "Kites" and "Wind", and it was a good chance to pull out my box of scarves and to try out the parachute with the 2 and up crowd. The problems I had were mostly parent/nanny driven, as in not helping their kids unless I prompted them, and as a result the parachute wasn't working as well as it could have.

Never mind. They had fun. I had fun! 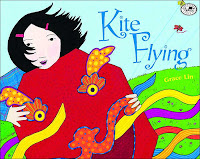 I like showing parents/nannies that there are great books for preschoolers in the non-fiction collection, and this is a prime example. Truthfully, it could as easily gone into the picture book section as it's just a simple story of a Chinese American family making and flying a dragon kite. The kids liked guessing what kind of kite it was when Mei Mei cut whiskers, and they especially enjoyed the back end pages of the book, which show a whole assortment of colorful Chinese style animal kites. 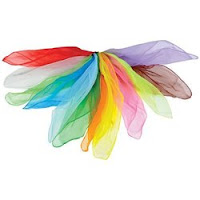 You can't fly a kite inside our library (or most), but you can wave a scarf and pretend it's a kite, and the light juggling scarves we use are just perfect for this.

We danced to the song "Let's Go Fly A Kite" from "Mary Poppins". I am not the biggest Disney fan, and as much as I love Dick Van Dyke and Julie Andrews, I far prefer the book. But I'll take a well crafted song by a real songwriter over a lame piggyback song any day of the week, and this is a terrific song.The kids danced enthusiastically, with or without their grownups! 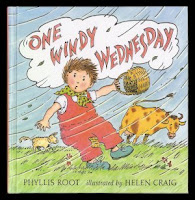 I wanted to use a wind book, and I love Phyllis Root, but except with my oldest preschoolers, "One Windy Wednesday" didn't go over very well, animal sounds or not. This is a book I think I will either flannelize or tell with puppets if I use it in another program. It should have worked beautifully. Instead it flopped badly.


And then it was time for the parachute!

I have a small room, so I have a small, inexpensive parachute via Oriental Trading. I think I need a larger, stronger one, especially if we are going to use it outside in summer. But it worked well enough for "Shaky, Shaky" ) by the Wiggles, "If You're Happy and You Know It" (just sung acapella), "Pop Goes the Weasel!"
(with a toy panda instead of a weasel) and "Zoom, Zoom, Zoom, I'm Going to the Moon" (the Kathy Naiman version, which I use a lot with the babies and toddlers). It was fun and I'm going to work on the parachute thing. 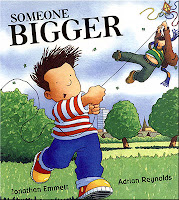 We ended with this book, which I adore because it has rhymes that really work, a perfect rhythm, funny pictures and a chorus that has the kids chiming right in!  Sam's dad won't let him fly the kite, because it needs "someone bigger". But it pulls Dad into the air, followed by all kinds of people and eventually several zoo animals until, of course, Sam grabs the kite and reels them all back to earth. I know this one was a hit because a mom immediately asked for a copy right after the program.


I did virtually the same program for my 3 and up group on Thursday afternoon. I don't have the adults in there though, so I did things I can't do when the grownups and the toddler siblings are about.

When we did the scarves, I also added Johnette Downing's "Scarves On Your Laps". I didn't bother to use her recording, I just sang it. It ends with "Scarves on the ground", so it's a good one to end a scarf time.

Afterwards, I had the kids scrunch their scarves as small as they could and hide them in their hands. Last time I did this, I tried to guess what color scarf they had (sometimes I can see them), this time it was "guess which hand it's in"? They really like that, especially when they fool me. We have that sort of relationship :D

I wanted more than just a "paste shapes on a kite shape" or a windsock craft, and was thrilled to find a simple kite that really flies. You don't need much for it--I did spend money on some surveying tape, but it's inexpensive and I'll find other uses for it,and you could probably use ribbons instead.

I let the kids draw on their paper first, then folded it and created the kites. Speaking of folding this, the picture directions on the site for the fold made things confusing. You really need to fold the paper more than they suggest so that you get the diamond shape on top seen here, and at first I couldn't get it to work. But it does work and kites WILL fly! And instead of cardboard winders, I salvaged some wooden spool things from my craft box and tied the strings to those.


That's all for this week. Hope there's something here you'll enjoy with the kids you love.
Posted by The Library Lady at 3:01 PM

Email ThisBlogThis!Share to TwitterShare to FacebookShare to Pinterest
Labels: Crafts, Theme of the Week

Tell me YOUR story!
(Please note that trolls of the kind who tend to live in apartments rather than under bridges will be mocked mercilessly, especially in terms of grammar and spelling...)