If there is one thing that really, really irks me about "Every Child Ready To Read" (and there's a lot to choose from) , it is this insistence on making sure that every single thing you do is packed with "tips for parents" to the point of analyzing finger plays for "this one teaches using all 5 fingers" and the like. 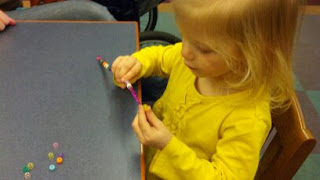 Last month the kids were doing one of my anarchistic crafts--stringing pony beads on pipe cleaners and twisting them as they wanted into "holiday decorations" and one of the moms commented, "And they're practicing fine motor skills!"

Yup. I didn't need to tell the moms that. They saw it.
More importantly, the kids had no idea that they were learning something.
They were just having fun. 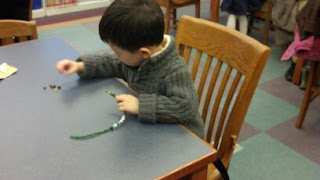 Posted by The Library Lady at 12:00 AM No comments:

On why I don't buy this stuff for my library, today on the original blog.
Posted by The Library Lady at 2:42 PM No comments:

Email ThisBlogThis!Share to TwitterShare to FacebookShare to Pinterest
Labels: Being a Librarian, Book Selection, Rants

NOT A Flannel Friday: The Polar Bear Hunt


I could SWEAR that I'd blogged this, but it may have been long ago on the original "Library Lady Rants" blog, and it's one of my favorite games!

Most people know and do a version of "I'm Going On A Bear Hunt" and this winter variation is just as much fun, maybe even more so. I'm going to give you a general outline of how to play this game, but my advice is let the children lead the way. Don't stick to a script! Their suggestions make this game even better and really draws them in.And it's building thinking and language skills while having fun.

My favorite recollection of the Polar Bear Hunt is playing it with the pre-K class from my favorite local preschool and having their teacher report later that the kids went back to school STILL pretending to be cold from being out in the snow. Now that's the magic of story time!


We usually climb up the cliff and find there's a polar bear cave inside! You could also have it just as a hole in a hill or something. Either way, it's time to crawl into the polar bear cave:
Again, this is an idea outline, NOT a script! Please improvise and let the kids help you!

SHHH! Be very quiet.
It's warm in the cave and dark.Do you hear snoring?
Reach out. Do you feel something furry?
It's a polar bear!
Pet it very gently. We don't want to wake the bear--it might get mad!

Crawl quietly out of the cave and reverse some of your actions to go home.
Before you go back through the door, stop. Do you see something out on the ice?
It's a polar bear! It's a mom polar bear and a baby. Wave to them!

What a great polar bear hunt!

Thank you to members of the Flannel Friday Facebook page for helping me get my act together with this program and for giving me some more scarf ideas that I am going to be trying out on my 2 and up groups soon. It's always great to add something new to your programs, and I think this is going to become a regular periodic feature of my toddler programs!

It's dark and gray and awful out there and I wanted to do something different and BRIGHT with my "Mother Goose" groups. So I pulled out the juggling scarves I use with the 2 and up set for "Nutcracker" and for other fun programs and decided to try them out.

In addition to the fact that the one year old set are just developing body control, they are not ready to follow directions in a group. For that you need cooperative parents and caregivers to guide them. And while some of my families/nannies are great, but others just sit there and watch their kids run amuck and don't even TRY to take part. Sigh..


There's  great scarf music for the 2 and up groups--just Johnette Downing's "Second Line" album would have had enough stuff for those programs, but what to do with the 1 year olds? Oh, to have had Kindermusik or Music Together training....

But I hunted through my music, trolled the Internet, begged help from fellow travelers and came up with this:


Des Colores For Toddlers
1)Opening:I started with letting everyone pick a scarf--or two, since we had plenty. And as they did, I commented on the colors--"Oh,look, Sienna is taking a yellow scarf and you have yellow stripes on your shirt!"   Then I put the rest of the scarves in a pile on the floor and let the kids grab as they liked. We only interfered if they tried to take scarves from each other.

2)"If You're Happy and You Know It" I don't think of this as a piggyback song, it's just doing different actions with a prop. And it works perfectly with scarves. We did "shake your scarf" and "wave your scarf", "throw your scarf" (juggling scarves float beautifully) and "play peek-a-boo!" You can also play "Hide your scarf" and scrunch your scarf in your hands or hide it behind your back.


3)"I Can Sing A Rainbow"   If you are shy about singing, you can find great versions of this song. Two of my favorites are Fred Penner and "Wiggleworms"--you can hear a clip of their version HERE.  I pretty much just sang this song while I tossed different color scarves in the air and those who felt like rocking with their kids did so. I thought of a flannel board for this, but the colors are not really the rainbow colors (pink instead of brown) and they're not in sequence, and they liked it just as it was. I need to find the guitar chords and try this on my ukelele!

4)"All My Colors"  Ralph Covert, I really want to give you a haircut because I think you look like John Cleese of Monty Python as "Anne Elk--Miss!", but I am in love with your music. This is irresistable to run around to, dancing and waving scarves and a lot of my close to 2 toddlers really grooved out to this. I kept throwing scarves in the air in various spots when I wasn't dancing.

This is an acoustic performance--not as much fun without the kid chorus on the "Ralph's World" CD, but it will give you a good sense of this song. Go about 2 minutes in to get to the music:

5)Des Colores  There are lots of versions of this, but I used the Raffi one and all my Spanish speaking nannies not only knew the words, they sang along and danced their kids. There will be more Spanish songs at programs and I think I have to get on doing some bi-lingual stuff. They'll be able to laugh at my Spanish!

6)Closing--Sort Of  After we did Des Colores, I just had them hold onto the scarves or drop them as they liked while we played "Ring Around the Rosie". During "Wheels On the Bus" we added "The kids on the bus wave Hi! Hi! Hi!" and waved the scarves.  We did the closing bounces and I told the parents/nannies I wanted to see if we could get all the scarves back in the box, but if not, try to just leave them in the room. To my delight, no one fussed and the kids had fun putting the scarves away!

This was all so much fun that I added it to my 2 and up program. It was a North Pole/South Pole theme, but in the middle, we did the recorded music and then I told the kids we'd danced all the way from the South Pole to the North!
Posted by The Library Lady at 5:41 PM 8 comments: