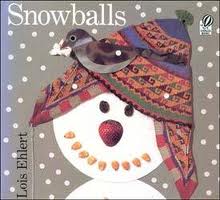 Year after year the Caldecott committes have ignored Lois Ehlert, who has done some of the most creative picture books ever done for children. So in her honor today, I present the snow family I made that were inspired by her book "Snowballs"

They are made from styrofoam balls. I discovered that a saw toothed knife like a bread knife is perfect for cutting them in half, and since they were going against a board, halves worked nicely. Toothpicks were used to join body parts and decorations were from various stuff I had in my craft stashes. There's a heart theme, since this will stay on the big board through February.


You may not have any Caldecotts, Lois, but you inspired an uncrafty person like me to make this. Imagine what you have done for art loving children everywhere!
Posted by The Library Lady at 6:04 PM 1 comment:

Email ThisBlogThis!Share to TwitterShare to FacebookShare to Pinterest
Labels: Crafts, Rants, The Art of the Picture Book

A Real "Flannel Friday": It's Not Just For Story Time

I use few flannel boards/felt boards/ magnet boards in my story times because there are so many other ways I prefer to tell stories.

But the recent success of my "playground of the mind" project (more about that some other time) and some of the "Flannel Friday" offerings inspired me to make flannel boards for use by parents/nannies and children visiting the children's room.

It was easy to find lots of "how tos" on the Intenet and I ended up heading to Michaels, where for about $5 I bought 2 8" x10" artist canvases.

I had a large piece of gray felt, so I used that to cover on of the boards, gluing the felt on the back with a glue gun.

Having made my board, I had a bigger dilemma--making shapes to use on it. As I may have said before, I am NOT an artist and can't do freehand cutting. In fact, I am a bad cutter because I am a left handed person who learned to cut right handed--back when I was a kid left handed scissors just weren't around,and I'm pretty good with my right hand for a lot of things.

We have an Ellison cutting machine at our central library, but it's a trip to go out there and takes time from work and I wanted stuff now. But years ago, the machine was housed in the branch where I worked, and I had made lots of cardboard stencils for use in kids crafts.  Including shapes and letters.

So I cut a whole batch of shapes out of colored felt. We had some stiffened felt and I really liked working with that--when I do letters I'll use that. It's more expensive, so I may try making my own--apparently it just requires dipping felt in a glue/water mix.

Here are some of my shapes. I cut all of them as fairly large pieces because for one thing the board is small and for another I don't want small, choking hazard pieces!

I didn't have any blue felt, darn it. Need to get some this weekend, but I made plenty of cut outs in the other colors, heaped them in small tray and put tray and board in one of the flat metal baskets I'm using for the toys:

Shortly after I set this out one of my favorite almost 2s and her mom came in and were playing with it. The mom had fun making pictures for her daughter, the little one also had fun dumping out all the pieces and putting them back in the tray again.

And later that evening I saw an older girl in the 6-9 range making pictures with the shapes.

The next set I'm going to make are Chinese tangram shapes. And then letters. And perhaps a "make a face" set if I can get help in making those pieces.

And I've still got another flannel board to make with that second canvas.

All in all, a really satisfying project!

Email ThisBlogThis!Share to TwitterShare to FacebookShare to Pinterest
Labels: Flannel Friday, Playground of the Mind

An enthusiastic librarian. Not necessarily loud and physical (though I am!) but someone who loves what he/she does and lets that shine through.

Well chosen material--I've talked about that before and will again, but if you do this job, you know what I mean.

Because it doesn't matter how good you are or how many bells and whistles you bring to the party if your parents sit there and play with their cell phones or talk to each other and the kids either universally run amok or just sick there staring at you!

My Tuesday group is tiny. Eight to twelve kids in a room where fifteen to twenty fills it up well, and when it's over twenty we manage, or I move everyone out to the main children's area.

And this fall they were PASSIVE. Aside from one nanny (who I adore and whose employers should double her salary)most of the adults just sat there, and the kids mostly just sat there too.

But today, they got up and danced. We did Nancy Stewart's January dance --with a small group, we could walk around the room in a circle and they did, and they participated. They danced to other music. They joined in on the books.

And it was MAGIC!